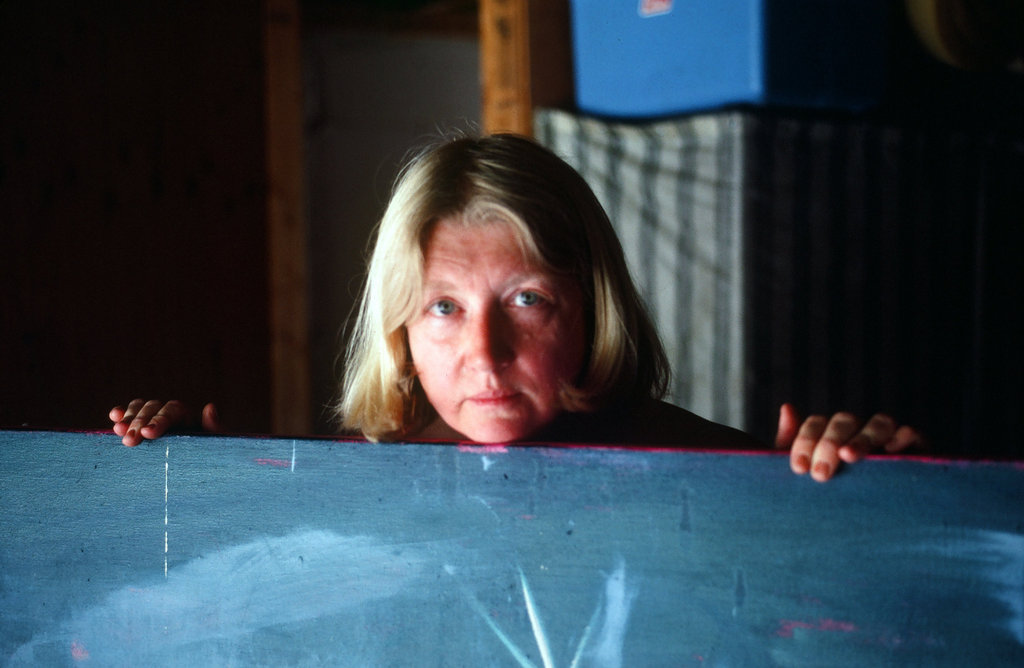 Jan Karlton was an accomplished artist and devoted mother and friend. Born Janice Marie Berthiaume in 1939, she moved with her mother, father, and three sisters numerous times throughout the United States. Jan eventually received her degree at the Maryland Institute for Art, and worked as an artist, drawing fashion models for New York department store advertisements. She was a passionate believer in no-nonsene accountability and responsibility. She loved her family, her friends. She held a special place in her heart for meerkats and house cats. Jan took pride in nourishing those in her life.

Jan was killed in an automobile accident in Canneli, Italy in the summer of 1997, along with her husband of 28 years, Phil Karlton, and longtime friend Rose-Marie Bröcking of Switzerland.

She is survived by her only child, David Karlton.

Laugh and the world laughs with you.
Cry and you get your t-shirt wet.

I had a happy childhood. I spent the first formative years in Pittsburgh, in Squirrel Hill. When I was seven we moved to Cupertino, California, where I lived half a block from my elementary school. They tore that down after I finished fifth grade. I remember wanting very badly to throw rocks through the windows of the new houses they had built atop Miss Skinner’s old classroom, but my morality got the better of me.

My father was a computer programmer. For me he really blurred the line between a genius nerd and a powerful, strong, bear of a man. He overwhelmed me in wrestling on the family room floor, deftly using his size and weight advantages to their full potentials. His prowess at mathematics, physics, and computers was awe-inspiring, and I was quite proud to have him as a father. My dad really knew how to party, and to have fun. Hey, we only go around once, might as well enjoy it. He had studied graduate level programming at Carnegie Mellon, until the job offer from Xerox PARC in 1978, which brought us West. 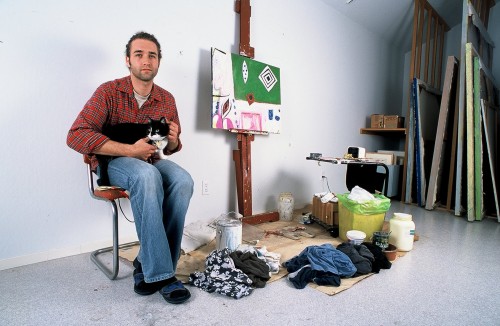 My mother was an artist. She was a beautiful blonde woman, sharp and witty, with the keenest, most subtle sense of humor that went past most people. I certainly appreciated it. So did my father; that was for sure. She held to her convictions, and by golly, if someone was in her way, they would soon regret it. But the tenderness she showed me in my upbringing was simply a marvel, and I think I acquired a strong sense of compassion and intuition from her.

I never really understood my mom’s artwork when I was younger. I should say, I didn’t really understand art at all. The idea behind it, and the appreciation for it were there, but I didn’t have enough experience under my belt to grasp the deeper concepts of the human experience—the struggles, the pain, the joy. The baser elements of the psyche were not evident to me yet, and wouldn’t be until I got a bit older. Most of my mom’s artwork was grotesque. It was hard to look at. It depicted suffering, and torment and pain being inflicted upon others. I think sometimes certain pieces frightened me. But they always caught my eye, as if I was looking in a mirror. Eyes would stare out at me, mouths perched to the point of saying, “You know me, David, don’t you?”

When I got a handle on things, I started to understand the nuances of what many of my mom’s pieces contained. I also realized that my impressions from any given piece might be quite different from someone else’s, but that was ok. My eyes saw through a different veil, wholly my own, created through years of growth. But I really liked my mom’s art. She had so much obvious talent. I never looked at a piece and thought, “Well, I can see she’s trying to get something across, but she lacks in the technique to do so.” On the contrary, everything she did was so full of raw emotion, it was splashing off the paper or the canvas. She was not an amateur, nor a hobbyist. She was a magnificent painter, whose works, for me, rivaled those of many renowned artists.

Her style changed dramatically over the years. Looking back at many of her pieces, I do note that her talents were actually being refined and perfected. I recall quite vividly seeing the work she was doing since 1995, and thinking to myself that she had really hit upon a new level of art. Her work had culminated through so many phases into something so new and amazing, I am still struck with awe when I see her last unfinished canvases. They hang in the studio, staring down at me, begging to be completed, to have the life they were meant to have; the life that existed only in my mother’s mind’s eye.

In the early 80s, she painted in a small portion of the garage, which was a dubious studio at best. Still, she managed to do a lot of huge oil paintings, and later when she rented a studio space in Mountain View, she was really able to go wild. With the addition to our house in 1992, she had her own art room space, right there at home, which meant the cats could keep her company while she worked. Some of the paintings reflect the influence her kitties had on her, their feline eyes peering in through the doorway, wondering what Jan could possibly be doing in the only room that was off-limits for them.

That room has largely remained off-limits for me as well. It has been a particularly trying struggle to go through hundreds of paintings, drawings, sketches, and notes. I so desperately want to know what my mother was thinking about when she created them. Although she was fairly meticulous about keeping records of her pieces, and writing notes about them, there are still wide gaps where all I have is an unnamed undated canvas.

letter written by Jan Karlton for her son, discovered posthumously

This is a letter about varied personal life observations. It may be useful for a memorial service. It may contain things for you to think upon as you go about living your own life. It may very well bore the socks off you. For this last reason, I will try to keep it short.

For several weeks, I have been thinking that “things” are going along unusually well, as if I have been following unrolling threads, with no tangles to impede the flow. Good gifts for the folks I love have appeared, without my driving all over the place. All the Christmas cards are sent, many with notes where I tried to tell them how much they mean to me. I have been able to give to charities and help out folks in that way. Every day, I realize clearly how much I love your Dad, and you, and friends and family. Underlying it all is a feeling that life is wonderful, and also that I need to wrap up a lot of loose ends. This and the other letters are the result.

Making a list seems the easiest way to pass on some “wisdom”.

1. Prejudice is moral bankruptcy. It is one of the stupider courses individuals or groups can follow, blind denial of the benefits any one life may bring to us all, in ways we cannot know. It is, first and last, a foolish and terrible assault on God.

2. Cats make good members of the household, especially if they are individually allowed and encouraged to be fully actuated feline personalities. Some of my best and most well-loved friends have been cats.

3. A sense of humor is a good thing to have.

4. “If you have no umbrella and it rains on you, the worst that can happen is that you will get wet.” This is something your Dad casually said to me many years ago, when I was anxious out loud about the threat of rain, with no cover at hand. This was such a profound notion, it stopped me in my tracks. Having grown up worrying about the terrible consequences that might happen from any situation, I was always expecting and trying to prepare for the worst. As Dad pointed out, if it did rain, instead of melting or catching pneumonia, I would just get wet; the end. Thinking about this eventually changed the way I approached daily life, and made living with me a little easier. How about that.

5. Organized religion has been a mixed blessing. When it teaches love and respect for everyone and everything in the world, it is an excellent thing. When religious mendicants teach hatred and distrust of anybody they consider inferior, which turns out to be everybody else, there is always trouble. All things considered, I believe that societies work much better when people are good to each other.

6. My heroes are: Mother Teresa; Franklin and Eleanor Roosevelt; Winston Churchill; the Huguenots in the French town of Chambeaux (sp?), who provided refuge to many Jews and displaced people during the 2nd World War; Gandhi; anybody I know of who chooses to face difficulties with calmness, strength and good cheer. Your Dad, who has overcome a lot to become the loving, funny, good person he was always meant to be.

7. I am an admirer or the U.S. Constitution and the Bill of Rights. Democracy, as formulated here, has been a boon to the world. Further, narrower musings have led me to believe that the fundamental difference between Republicans and Democrats, in a worst-case scenario, is that Democrats seem to mess up in the venal department; sex, money, and greed. Republicans go for the manic attacks on civil liberties and have a narrow and parochial view of the Constitution and the Bill of Rights. In a politician, I much prefer venality to reactionary subversion.

8. This is the silly section, where I get to make a list of things I like, to wit; gardening, writing, cooking, cats, rain, hand sewing, being with friends, being with family, being with Dad, walking, making a comfortable home, pizza, your singing, making lists, Miss Marple, helping someone, reading; (especially mysteries and history, and anything be John Le Carré), laughing at silly stuff, train travel, funny movies, and making good art.

All my love,
Mom